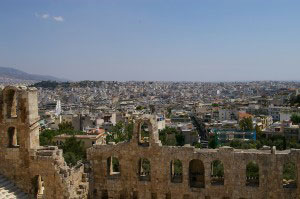 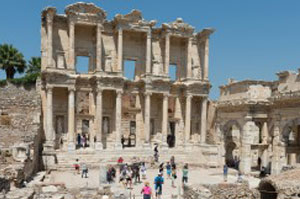 Steps of Paul, Cruise and Tour: Ephesus and Patmos 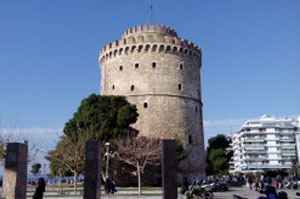 Day 1: Departure from US
Today we embark on our Journey to the lands of ancient treasures and Christian history with an overnight flight to Greece. Prepare yourself for a life-changing experience.

Get some rest on the flight, tomorrow you will be walking where the apostles walked!

Day 2: Arrive Athens
We arrive in Athens and check into our hotel.

You will have the remainder of the day free to relax or take a stroll along the streets of Athens to enjoy the flavor of the city. This evening our group will enjoy the first of many delectable European style dinners.

Day 3: Cruising Mykonos
We sail this morning from Athens to the quaint isle of Mykonos, called the island of windmills. Experience the waterfront lined with shops and cafes and then stroll the charming walkways through a maze of whitewashed buildings before returning to the ship for dinner and evening entertainment.

Day 4: Ephesus and Patmos
Docking in Turkey, enjoy an optional tour of Ephesus, the city of the Bible and one of the largest restorations still in progress with miles of ancient treasures.

Ephesus was once a thriving port town of 250,000 people. Today you can still see the spectacular excavations of the major streets in this ancient city including the Agora, the Odeon, the Library, the marble-paved main Street, the Baths, Trajan’s Fountain, and the Residences of the Patricians, the Prytaneum, and Temple of Hadrian. The Great Theatre, built in the 4th century B.C., could accommodate 24,000 spectators and it is famous even nowadays for its acoustics.

This afternoon we visit the Isle of Patmos, under statutory protection as a historic monument. Here we see the fortified monastery of St. John and the cave claimed to be where John received the Revelation. Back on the ship, enjoy the Captain’s dinner before settling in to your cabin for the night.

Day 5: Crete and Santorini
Crete is the largest and the most rugged of the Greek islands. Take an optional tour to Heraklion and the fantastic ruins of the Palace of Knossos. Discovered in 1899 and partially reconstructed, the elaborate Palace is believed to be the mythical Labyrinth of King Minos and the seat of ancient Minoan culture. This afternoon visit the island of Santorini which is perhaps the most breathtaking of all the Greek Islands. The town of Thira where white-washed houses, narrow streets, open-air cafes and glittering boutiques cling to steep cliffs, is accessible by foot path, cable-car or mule. We enjoy this lovely island by cable car and on foot. Again we return to the ship for dinner and evening entertainment.

Day 6: Disembark Cruise – Athens
We disembark the cruise this morning and travel into Athens, the foundation of democracy. We visit the Acropolis, the Parthenon, and Erectheum before viewing Athens atop Mars Hill where Paul stood and preached the truth to the Gentile nation.

Additional sites include the Agora (ancient market place and center of Athenian public life), the House of Parliament, and the Tomb of the Unknown Soldier, Olympic Stadium, and Presidential Palace.

A short walk from your hotel is the famous Plaka with a multitude of shops and cafes.

Our lodging is in Athens for the next two evenings.

Day 7: Corinth & half day free in ATHENS
Following breakfast this morning we depart Athens. We immediately travel west with a rest stop and photos at the Corinth Canal. We then travel to the ancient city of Corinth, another treat for the New Testament scholar. Corinth is the city that inspired many of Paul’s most familiar letters. See the Archaeological Museum, the Market Place, the Bema, and the Temples. To enjoy a devotional in the midst of the ruins of the church of Corinth and see the pillars, steps, and public worship place where Paul preached will enhance your understanding and love of I & II Corinthians. The ruins of this important cultural center are fascinating as we walk along the stone path that the Apostle Paul walked. The engineering skill and intellect of these people are evident in the water systems that still flow from ancient to modern day.

Our guide will be sure to show you the room dedicated to the medical care of that period.

After the visit to ancient Corinth back to Athens for a few hours of free time to walk around the city.

Day 8: Vergina, Berea, Thessalonica
Traveling northward into Macedonia we visit King Phillip’s (Alexander’s father) tomb in Vergina, one of the most outstanding finds in all of Greece. A stop will be made in Berea to view the ancient synagogue where Paul spoke and the Bema surrounded by mosaics of Paul and the plaque of scripture regarding the “more noble” church.

Driving through town we see remnants of the original Roman road that spanned the nation during Paul’s time. The New Testament books of I & II Thessalonians will come alive to us today as we arrive in the delightful harbor city of Thessalonica.

En route to the hotel we will view the old city ramparts; the newly excavated Forum, St. George Church, an ancient Roman monument which was transformed into a church and the Galerius Arch which rises over the famous Via Egnatia.

Day 9: Thessalonica / Philippi / Kavala
We begin the day by following the massive battlement Byzantine wall to the citadel for a panoramic view of the city. Next, we will visit Philippi and Kavala. Kavala is Greece’s prettiest mainland port with a most elegant harbor. Paul landed here with his disciples, Timothy and Silas. Luke, the Evangelist, also came here from Troas. This ancient city of Neapolis was later renamed Christoupolis because it was the first European city to accept Christianity. Imagine walking on the same sod as these men of the Bible!

We will see the Roman Aqueduct and the ruins of the Acropolis in this beautifully located city, known since the 5th century as Kavala. Continue on to Philippi where Paul preached his first evangelical sermon and baptized the first Christians on European soil.

We will view the baptismal site where Lydia surrendered her life to Christ and visit a crypt dating from the Roman period that is thought to have served as a prison for Paul. See the famous Acropolis, the Market Place, Basilica, and the Theatre.

We return to Thessalonica and visit St. Demetrius Basilica, dedicated to a distinguished member of the Roman army and a martyred Christian convert, before returning to the hotel for our final night.

Day 10: Homeward Bound
We transfer to the Thessalonica airport for our flight home.